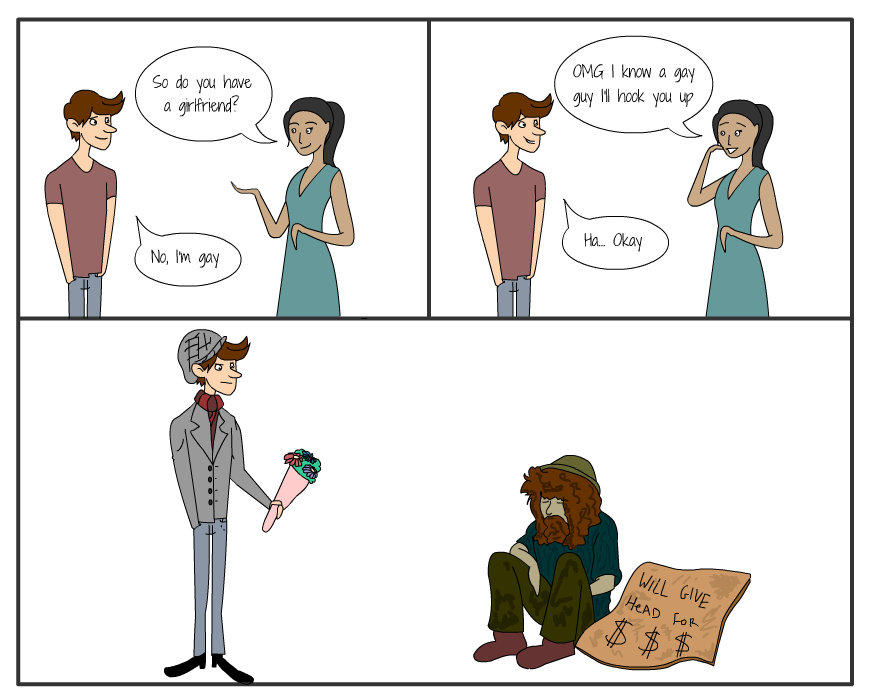 It's really great that society is becoming more and more open to members of LGBT community. Everyone wants to be accepted, and it's always a relief when you can be yourself and be met with people who are understanding and supportive. BUT...straight people can sometimes be a little too eager to show their support by proving that they're totally okay with a guy being gay by wanting to instantly fix him up with the one gay person that they know.

A. Learned that a man was gay and then instantly said "OMG I KNOW THE BEST GUY FOR YOU!!!" Of course, you pique said gentleman's interest, so he asks to learn more. "Really? What's he like?" he asks. And you reply "Well, he's gay. And a man." Because...that's really the only reason why you thought of fixing them up in the first place.

B. Been speaking with a gay man at a pub, having a conversation about something completely unromantic in nature. Then, you discover that he mentions in passing that he's gay. First, you apologise. What for? For not knowing? For being a member of the opposite sex and finding him attractive or for being a member of the same sex and not finding him attractive? You don't even know. But you're sorry anyway. Then, as some odd way of making up for the offence, you mention your gay best friend who would no doubt be perfect for your new found friend at the pub....just because he happens to be gay, too.

C. Discovered that someone was gay and then immediately mentioned some other random gay person that you know, suggesting they meet. For example, your new coworker says "I'm gay," and then you say, "Oh! This man who washes his shorts next to me at the laundrette every Thursday is gay. You should meet him!" Because clearly, your coworker needs your help meeting other men...for some reason.

If you answered yes to A, B or C, then it's time to come to terms with something--gay men have types, too. They're just as choosy as you are about who you might want to date or shag. Imagine how confused you would be if a gay person found out you were straight and then immediately suggested you meet some straight friend of theirs because you're both straight. You'd think he was off his trolley.

And it's not only gay guys that get this treatment! Lesbians are vulnerable to the well intentioned yet unnecessary fix-up with the only other lesbian that you know, too. Of course, it gets to be an expected thing and unlikely to really offend anyone, but it does leave you looking a silly. SO STOP.

The next time you feel tempted to play gay or lesbian matchmaker, just take a deep breath and think of a different topic of conversation. The best way to show you support the LGBT community is just to treat its members like you would anyone else! Or at least set them up with someone hot!