Your Vs You're Guy 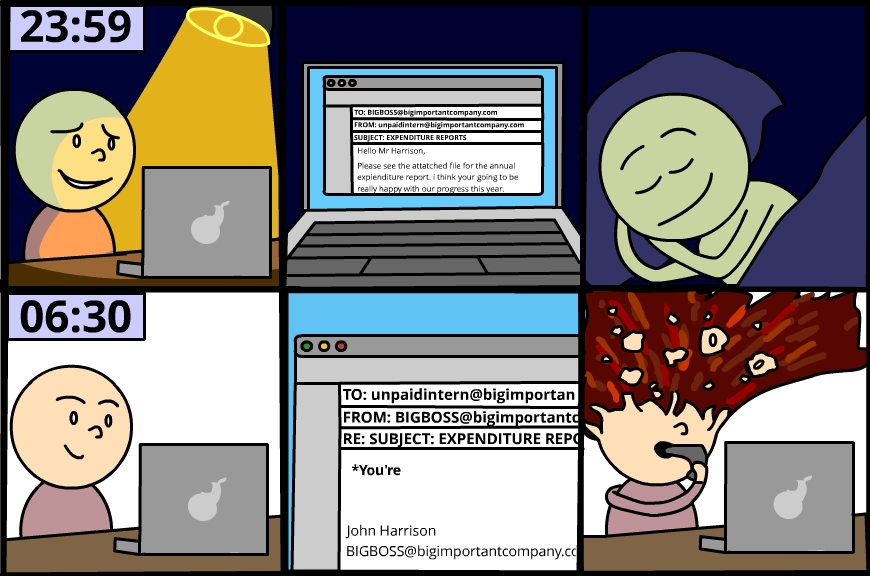 You wake up in the middle of the night with a brilliant idea for how to solve a problem at the office. Although you're still a bit groggy, you reach for your phone and type everything out. You send it off to your team. You feel triumphant as you drift back to sleep. The next morning, you wake up to many messages of praise in reply, but you barely read any of them because one catches your eye. All it says is...

I think you meant you're, not your.

If you can empathise with this story, we know your pain completely. If you're not understanding what the problem is with this scenario, we have some tragic news for you.

You are The Your Vs You're Guy for everyone you know. This is a very bad thing. It means that on a regular basis, you annoy people to the point of wanting to throttle you. Your behaviour is out of control. It needs to stop. We're only telling you this because we care.

Confused to who The Your Vs You're Guy is?

Well, he's the guy who is always the one to point out when someone has used your when what was required was you're or vice versa. He may say it to you aloud in front of others at a time when it is most embarrassing. He may 'Reply All' to an email you've written with this helpful feedback. He might post it in response to the otherwise well-argued point you made in a comment or on in response to a Facebook Status Update.

So what can you do if you've just realised you're The Your Vs You're Guy? First of all--don't panic. You can change your ways. It's not too late. Start off by committing these rules to memory:

It's only ever okay to correct someone's your versus you're if you've been assigned to edit their work for something or you're a teacher of some kind.

If you absolutely have to comment on a your versus a you're, don't be a dickhead. Assume it's a typo, not that the other person is a moron.

There are only two rules, so you shouldn't have difficulty recalling them. Once you've committed them to memory, go out into the world and free yourself of the responsibility of being the grammar police! You'll feel liberated, and everyone else will be eternally grateful.

Once you've reinvented yourself and become The Guy Formerly Known as Your Vs You're Guy, maybe you can help your friends--To, Too, Two Lady and Their There They're Man. We've all had enough of them, too.